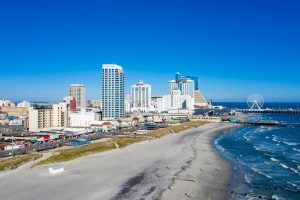 Atlantic City expects to celebrate the start of construction for two nongambling projects later this year, a $100 million indoor water park and a grocery store, while the state of New Jersey just named a special adviser to shepherd the diversification of the struggling seaside town’s economy.

Expanding Atlantic City’s economy, attracting new kinds of development and businesses, is considered a key to its long-term economic stability and prosperity by both local and state officials. It means attracting not just gamblers to its casinos and day-tripper families to its beaches, but more residents and year-round visitors. Two developers are betting on it. And the city, the biggest U.S. casino market outside of Las Vegas, in the past few years has made some strides drawing different types of businesses and services.

Most notably “eds and meds,” or college and healthcare facilities, have come. Stockton University has not only opened a satellite campus and one dormitory on the city’s iconic boardwalk but is adding additional housing. And healthcare provider AtlantiCare is building a $38.3 million pavilion across from its existing hospital that will also serve as a teaching site for medical students.

Then there’s the family-oriented fare on the horizon. Philadelphia developer Bart Blatstein is scheduled to start construction in late fall on his 100,000-square-foot water park, which will have a retractable roof, next to his Showboat Hotel on the boardwalk, according to his spokeswoman. An 8,000-seat outdoor concert venue is also in the works for the vacant site. And construction on a 40,000-square-foot ShopRite is expected to start later this year, the city’s first grocery store.

But there’s no denying that the pandemic, which shuttered Atlantic City’s casinos for months last year, took an economic toll on the municipality. The water park groundbreaking was originally planned for this summer but was pushed back. Crime has skyrocketed in the city. And there’s uncertainty, such as what billionaire investor Carl Icahn plans for the site of his Trump Plaza Hotel & Casino, which was demolished in February, leaving a large gap on the boardwalk.

Acknowledging that Atlantic City needs a boost, New Jersey is once again stepping up to lend a hand. Gov. Phil Murphy recently appointed state Sen. Chris Brown, who is leaving the Legislature, as senior adviser for Atlantic City affairs, a newly created post in the state government. Brown will lead initiatives in Atlantic City.

*Article courtesy of Press of CoStar