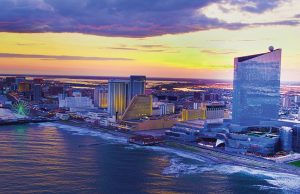 ATLANTIC CITY, N.J. (AP) — New Jersey lawmakers passed a bill Monday that would extend the state takeover of most of Atlantic City’s major decision-making powers for another four years.

If the bill is signed into law by Democratic Gov. Phil Murphy, the state will have been in charge of the seaside gambling resort’s major functions for nine years at the conclusion of the latest measure.

The move came on the same day that two City Council members called for the New Jersey State Police to take control over the Atlantic City Police Department amid a surge in violent crime. Recent incidents include a fatal shooting Sunday night that left one man dead and three others wounded, and a fatal stabbing the day before that left a man dead and a woman critically injured.

The government takeover was proposed by former Gov. Chris Christie, a Republican, and enacted in the Democrat-controlled state Legislature in 2016.

It was designed to help the state reign in runaway expenses, high taxes, and poor governance in the seaside gambling resort that, despite the presence of the casino industry, had enduring financial woes. Appeals from the casinos successfully challenging their tax assessments blew large holes in the city’s budget.

It stripped civil service rights and protections from many city workers, making it easier to make changes in the way city departments were staffed and run.

He said an important provision of the bill restores job protections for city workers.

“It’s important for the morale of the police and fire departments, with the understanding that we can’t go back to past practices with big increases in contracts,” Mazzeo said. “There is only a certain amount of wiggle room for negotiating contracts, but I think it’s time to let everybody get back to the table and negotiate.”

Murphy, Christie’s Democratic successor, campaigned on a pledge to end the state takeover, a stance he reversed shortly after taking office.

The city’s financial situation has improved since the takeover began, and Wall Street ratings firms have upgraded the city’s fiscal outlook.

State control had been set to end this year.

On Monday, City Council members Latoya Dunston and Moisse Delgado called for a state takeover of the police department.

“We are in desperate need of action by the governor’s office and the State Police, not tomorrow, but today,” Dunston said.

Mayor Marty Small held a news conference an hour earlier intended to preempt one by the two council members at which he defended his administration’s efforts to equip and lead the police department.

He also repeated a call to parents to get their children under control, saying “all levels of government do not raise your children.”