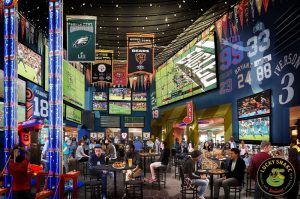 The owner of Atlantic City’s Showboat property has unveiled plans for an expansion that will create New Jersey’s largest arcade, a sports bar, and other offerings at the former casino.

Bart Blatstein, CEO of Philadelphia-based Tower Investments Inc., is eyeing a May 15 opening for what he calls Lucky Snake at Showboat. Along with the 100,000-square-foot arcade, the 25,000-square-foot sports bar will feature a boxing ring, with plans also calling for indoor venues for live entertainment, a speakeasy, and improved convention and meeting spaces.

The developer announced the details on Thursday after receiving approval last week.

“This is a very exciting time for us,” Blatstein said. “We at Tower Investments are extremely proud of this hotel and are thrilled to further expand on its offerings for guests of all ages, especially families. It has always been our mission to deliver an unforgettable experience for our guests and we are delighted to bring a family-friendly and year-round resort option to Atlantic City.”

Located on Atlantic City’s iconic boardwalk, the Showboat Convention Hotel is the state’s largest non-casino hospitality venue. Tower Investments acquired the property in 2015 after it became one of several failed, shuttered gaming halls in Atlantic City, paving the way for Blatstein’s firm to repurpose to distinctive property.

On Thursday, he said his firm was doubling down on non-casino family entertainment in the resort town. To that end, the new arcade at 801 Boardwalk will include the world’s largest crane game, rising from floor to ceiling, in addition to classic games from the ’80s through today and new titles and virtual reality games.

Plans also call for basketball games, pinball, skee ball, and more, according to a news release, which said the arcade will offer redemption prizes ranging from candy to designer purses and jewelry, cars and motorcycles, and all-inclusive vacations. Packages offering guests unlimited gameplay or gameplay with food and beverage will also be available.

The sports bar will include an e-sports gaming area, as well as a 20-foot-by-20-foot boxing ring, the news release said. The indoor venues will feature live entertainment seven days a week, hosting areas for music performances and street performers.

Meantime, the speakeasy concept will be the only one of its kind in Atlantic City and will feature the famous Riviera sign that was once a staple on the Las Vegas strip, Blatstein said. He also detailed the enhanced convention and meeting spaces, which will also offer group experiences.