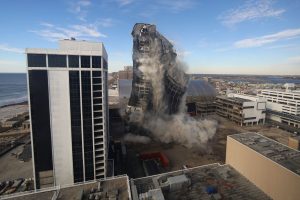 In its final incarnation, 19 seconds of deliberate destruction, Trump Plaza took its place alongside Atlantic City’s most iconic symbols of failure, imploded during an Ash Wednesday breakfast hour, followed by the after party.

From the beach, where several hundred gathered, the Plaza’s 9:07 a.m. final death rattle thudded against the sand until the main tower, already stripped of its parts and exterior walls, a house of cards draped in black netting, begging for years to be put out of its misery, disappeared from the Boardwalk skyline.

About a dozen interior blasts silenced the crowd — which had been passing the time reminiscing about sex in Plaza bathrooms, among other memories — followed by a low rumble out over the Boardwalk, and then the collapse: the rear first, and then the front penthouse levels finally falling backward into itself. It looked like a melting slot machine.

The Atlantic Ocean took no notice.

Tony Andaloro, a day one food captain, pointed out where he had worked: the nouveau French restaurant named for Trump’s first wife, Ivana, a view quickly replaced by a windswept cloud of dust over the beach that sent Atlantic City Mayor Marty Small and other officials gathered on a nearby pier scrambling to get inside.

“It was the best job I ever had in A.C.,” said Andaloro, who watched from behind police fencing on the beach at Georgia Avenue. Nearby, Larry Kang, of Queens, held a small baby Trump balloon.

And so it was that the Donald Trump era, at least in Atlantic City, where it remains an endlessly debated reign of brass and celebrity, boxing and bankruptcy, a dubious domination of a town that bloated to four Trump casinos, then shrank to none, was finally put to rest, 39 stories of rubble, a definitive demise.

The old guard turned out to watch, like the Doughertys, who watched from the roof of their Dock’s Oyster House, a century-old classic on Atlantic Avenue that has outlasted many an Atlantic City casino and hotel, including two prior implosions: the Traymore in 1972 and the Sands in 2007.

Over at Caesars, high-rollers were offered champagne in $299-a-night rooms.

People gathered on top of parking garage rooftops, and at One Atlantic, a nearby wedding venue that juts out into the ocean on a pier, where people who had successfully bid (about $600) on 10 pairs of VIP seats sat at little tables behind glass.

But in the end, whatever anyone’s feeling about Trump or the Plaza, impeachment or implosion, it was what it was: another new empty lot in Atlantic City, masquerading as progress.

The casino itself has been closed since Sept. 16, 2014, when it became the fourth casino to close in one year in Atlantic City.

The crowd Wednesday wasn’t quite what local officials originally imagined when they dreamed up a high-profile auction to ceremonially “push the button” to start the implosion, originally scheduled to cheekily follow the inauguration by about a week.

Bids rose to $175,000, to benefit the city’s Boys & Girls Club. People joked about who could come to town to bear witness: Stormy Daniels? Hillary Clinton?

But Carl Icahn, the billionaire who took control of the Plaza out of bankruptcy in 2015, objected to any implosion spectacle, and instead made a personal donation of $175,000 to the Boys & Girls Club. The date of the implosion, executed by Haines & Kibblehouse Inc., was moved to the less-than-spectacle hour of 9 a.m., on a seemingly random Wednesday in February. Icahn footed the bill for the implosion, estimated at between $11 million and $14 million.

The city tried to persuade people to pay $10 to park at Bader Field and watch from cars, across the water. About 330 cars, many from out of state, a few with Biden or “Resist” bumper stickers, took them up on their offer. But people, including former employees like Van Jones II, who looks back nostalgically at his years as a Plaza bar porter, wanted to be closer in, to viscerally take it in, or at least to be able to buy a drink at the back of Ducktown when it was over.

Jones came with his mom, Dawn Matthews, who also worked at Trump Plaza, as did his dad. They watched from a parking lot on Atlantic Avenue, where Dawn became emotional, and people hooted and cheered all around them. “It’s like a death,” Matthews said. She blew a kiss, teared up, made the sign of the cross.

The Plaza, the centerpiece of the Boardwalk, served as both a tantalizing symbol of its namesake president and an uncomfortable reminder of the resort’s glory days, when room-service waiters and cocktail servers made piles of cash, bought houses, sent kids to college, and also a reminder of the town’s more desperate days, when the area led the country in foreclosures and unemployment.

But the former Plaza, stripped of its Trump lettering after Donald and Ivanka Trump sued, was also just a deteriorating building that needed desperately to come down, a failed enterprise in the middle of Atlantic City. In the days before the implosion, the last trace of outline of Trump’s name, faintly visible on the Boardwalk facade, had been further painted over in a sky blue.

For months, demolition had already been underway, and the building had been covered in black netting to keep the pieces of crumbling facade from hurting anyone.

Over at the Ducktown Tavern, plans to have a priest on hand to spread ashes, of whatever sort, had fallen through. “Nobody wanted to do it,” said owner John Exadaktilos.

The early crowd at Ducktown was already getting into arguments.

“I’m glad to see it go,” said Gail Von Schlichting, who said her wife worked there as a slot technician. “It’s nice to see another Trump failure. I only wish his name were on the building.”

“There were some great fights,” said Jim Hill of Pleasantville. “At one time he had this town booming.”

“You can’t make a blanket statement that all Democrats are bad,” said Melissa Goldsborough, of Atlantic City, after a brief back-and-forth with another customer gathered at Ducktown.

“It’s a shame the building’s going down,” she said. “He still owes all those contractors. Hopefully they’ll put something in its place for families.”

“Like they did at the Sands?” said Hill. “Ain’t nobody investing in A.C.”

There was a pause as the Ducktown chorus considered the truth in that.

In destruction, the city insists it is finding hope. The next big plan could materialize any minute now, although Icahn has remained mum about how he’ll shepherd the property to its post-Plaza reality. The city is hoping to get the mound of implosion debris cleared by Memorial Day.

Mayor Small, whose determination to get the Plaza imploded brought literal cheers in a state-of-the-city address, would like to see a family-friendly development. Others stress the opportunity to connect the city’s outlet mall, the Walk, more seamlessly to the Boardwalk in a mixed development of retail, restaurants, and entertainment. Others dream of simple pleasures like an ice-skating or roller rink and food trucks.

For now, post-Trump Plaza, post jokes about ashes, post symbolism, with the literal end of the Big Metaphor, the main job is the cleanup. “I couldn’t be more excited,” Small said.