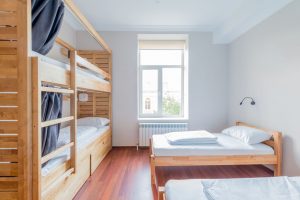 Atlantic City is slated to see a new college dorm building in the coming years, after local, state and university officials broke ground on a 135,000-square-foot dorm in what’s been dubbed the city’s “Chelsea neighborhood.”

The 416-bed dwelling is slated for a fall 2023 completion. Its originally-scheduled March groundbreaking was delayed as the COVID-19 pandemic forced the closures of universities across the state, and the city’s nine casinos.

This new dorm is part of “Phase II” of Stockton’s Atlantic City campus—the second leg of the $220 million “Atlantic City Gateway Initiative,” which in addition to Stockton University’s campus includes the headquarters for South Jersey Gas and AtlantiCare Urgent Care.

“We’re going to help people in the Chelsea area, people with home ownership, people with small businesses, and a place to make sure it’s safe,” Jon Hanson, who oversaw the creation of the project’s developer, Atlantic City Development Corp., and was named to the recent NJBIZ Real Estate Power 50, said on Wednesday.

Stockton opened its Atlantic City campus in the fall 2018 semester with an academic building, a parking garage and a 533-bed residential complex

“This area is booming, scores of new businesses are coming, development opportunities are happening and we really want to take Atlantic City to the new level,” Atlantic City Mayor Marty Smalls, who is campaigning for reelection for a one-year term, said at the Wednesday morning groundbreaking ceremony.

Atlantic City has been under state oversight since 2016, an arrangement entered during the administration of then-Gov. Chris Christie, a Republican, after the closure of five casinos cratered the city’s tax revenue and pushed it to the brink of bankruptcy.

The Department of Community Affairs – under the watch of its commissioner, Lt. Gov. Sheila Oliver – has pushed for a more collaborative approach with local officials, rather than top-down control in the city.

“This structure is going to represent an expansion of this whole corridor,” Oliver said on Wednesday. “You are going to see businesses want to begin to local themselves all along this corridor.”

The project was able to move forward after Gov. Phil Murphy signed a $32.7 billion budget covering through June 30, 2021, which restored $4.6 million to Stockton’s Phase II project.

For more information about the  Atlantic City market or about any other Atlantic City commercial properties for sale or lease, please contact WCRE at 856-857-6300.